Join Kristi Campbell and Tom Bassett as they make a few puns and discuss Salesforce Release Readiness and the Trailblazer Community! 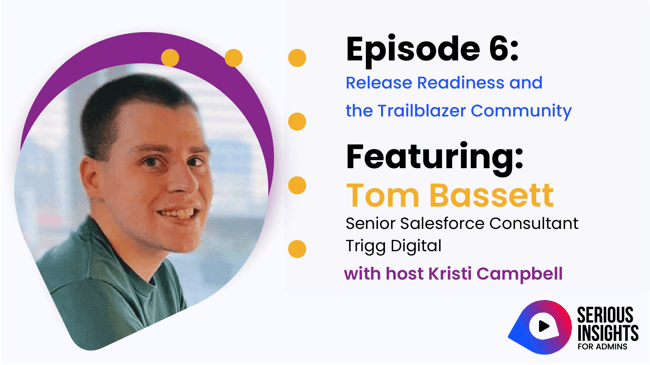 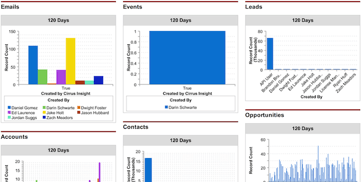 Read more about this topic Start your Free Trial and see how more than 10,000 companies are powering data-driven sales with Cirrus Insight.

Email at scale to prospects, clients, and customers to hit your numbers 42% faster!

It’s the beginning of summer, and you know what that means — it’s also Salesforce release season! Get ready to hunt your pre-release orgs for treasures and retire some old products for shiny, new features.

But for newer admins, the new release process can be overwhelming. Luckily, Salesforce’s release process has come a long way from the days of long downloadable PDFs! There is now a consistent and repeated procedure every release season, with plenty of resources from Salesforce and through the greater Salesforce community available to walk you through the process.

“The thing that I enjoy about the release the most is the collaboration with others in the community and the competitiveness of it. […] We're all kind of working towards the same common goal of understanding what's coming,” says Tom Bassett, a Salesforce Answer community contributor and SalesforceBen blogger.

Listen to this episode to learn:

It’s the beginning of summer, and you know what that means — it’s also Salesforce release season! Get ready for products across your organization to get shiny new features and updates, and for others to retire in favor of new solutions.

This is an exciting time for Salesforce users: it means a healthy hunt within pre-release orgs for hidden “treasure” and earning new Trailblazer Badges along the way. And don’t forget to use the hashtag #Summer22Treasure!

For newer admins, though, getting used to the release process can be overwhelming. Luckily, Salesforce’s release process has come a long way from the days of long downloadable PDFs! It now uses a consistent and repeated procedure each release season. And beyond that, there are plenty of resources from Salesforce and through the greater Salesforce community available to walk you through the process.

“The thing that I enjoy about the release the most is the collaboration with others in the community and the competitiveness of it. […] We're all kind of working towards the same common goal of understanding what's coming,” says Tom Bassett, a Salesforce Answer community contributor and SalesforceBen blogger.

In this episode on Serious Insights for Salesforce Admins, Tom joins Host Kristi Campbell, Senior Salesforce Admin & Salesforce MVP, as they talk through everything you need to know about release readiness, from the basics of pre-release orgs to useful community tools and resources.

Keeping up with Salesforce updates three times a year can be a big undertaking. But as an admin, it’s important to stay up to date on new releases that could impact your organization.

One of the best ways to do this is to sign up for pre-release orgs, which allow you to test new features in a sandbox, or testing environment, before their full release. Having that head start could be a huge time saver; just make sure to keep all your orgs active so that you can stay in the loop for future releases.

Get inspired by new releases with the Salesforce community.

One of the most exciting parts of new releases is the treasure hunt for new features and releases within your pre-release org alongside Salesforce users around the world. As you hunt for exciting new releases you, can even earn Trailhead badges by posting about the treasures you discover with the hashtag #Summer22Treasure.

There’s a competitiveness to the treasure hunt, but also a sense of collaboration within the Salesforce community. “We're all using the same system, so we're all kind of working towards the same common goal of understanding what's coming,” Tom says.

Leverage the resources you have to make sure you’re prepared.

Being ready for a feature update means preparing for the before, during and after: “It's really important that you keep the show on the road, and that post-release, it actually still works,” says Tom.

💥 What he does: Solution Architect at Trigg Digital, a Salesforce platform providing sales, customer service, marketing and solutions to all your Salesforce needs.

🔗 Tom on the web: LinkedIn | Trailblazer

🧠 Tom’s big idea: “I think the really empowering thing about the community is that I can be sat here in the UK and help somebody on the other side of the sea in America, or wherever they are, and have a really influential impact and positive impact on their day by just making something easier for them to understand.”

Key excerpts from the episode transcript

💡 Know how Salesforce updates apply to your org.

[03:24] Tom: “And part of our journey was to also just make sure that there aren't any critical updates that are going to be enforced at the same time. For example, if Salesforce is changing the behavior of Email-to-Case or something like that, that would have affected us, or me as an admin, it's important to know what that is, where that's coming along. And also, maybe taking advantage of trying these things out in a sandbox. Because as you may know, Salesforce update the sandboxes first, and you can also get your hands on a pre-release org too and through that, again, you can get to grips with some of these new features, and maybe start thinking about how they could apply to you and how they could apply to your use cases.”

💡 Get inspired by release readiness sessions.

[08:57] Tom: “Towards the end of the release cycle, Salesforce go into overdrive, and they do these release readiness sessions on an almost daily basis. They do one per cloud. And I've also seen them, before, do a whole session on Flow, because as we know, Salesforce is going with the Flow. So it's certainly interesting to also get a glimpse of what your org will look like post-update, and maybe be inspired a little bit about how you can do things using the new features or maybe how you can make things simpler now that something else has come out. So that's, I guess, the thing that I enjoy about the release the most, is the collaboration with others in the community and the competitiveness of it.”

[16:56] Kristi: “I do think it's a great point of reference to start from, especially because, as you mentioned, you've got people there posting their Easter eggs when pre-release orgs come out, you've got links in the group information about all the different guides and dates, and anything you might be getting via email as an admin, they're going to link to those posts as well. One thing that we talked about that I think some people don't know about is the Release Matrix […] It's an actual Excel document that allows you to filter for different clouds and features. So that’s just another way to kind of organize yourself. I've seen some people import it into an org to have objects and records to actually track the things about a release that they want to manage. And then of course, as you mentioned, there's a link to the Trailhead modules and the schedules of the official Salesforce things that they're doing. So you've kind of got a good balance of the members of the group posting things, and the actual information for the official Salesforce stuff.”

💡 Salesforce is listening to your ideas.

[19:30] Tom: “Historically, there was that frustration that there was a number of ideas that have been out there for a long while, and they haven't necessarily been addressed or maybe not even replied to in some cases, and Salesforce is trying to improve that and flip the problem on its head a little bit with the prioritization rounds that you get a couple of times a year as well now, where you get given some virtual coins — and trust Salesforce to make something like a game, they do it so well — you get your virtual coins and you spend them on the ideas that they've selected for the prioritization. So that's always good. And you can actively influence there in your own way, what is coming up next. So we’re actually starting to see some ideas that have come from a round of prioritization, have won that particular round, and you're actually now starting to see them through to completion.”

💡 Make sure your system is prepared post-release, too.

[30:56] Tom: “Usually, when you're an admin, you don't necessarily have users that are working 24/7, and Salesforce time the release on purpose so it happens in the small hours of the morning. But there are some use cases where you do actually need to think, I've got users that are going to be using a system at that point. [...] So I think that part of release planning is really important, too. And if it's just a templated email or something you send out and say, Hey, the release is coming. As a result, the system is going to be offline between this window. And if you notice anything weird post-release, then let us know, and we'll take a look at it for you. I think that just kind of reassures the users as well.”

[09:40] Tom: “The thing that I enjoy about the release the most is the collaboration with others in the community and the competitiveness of it. […] But ultimately, we're all in this together, whether or not we know each other is a different fact. We're all using the same system. So we're all kind of working towards the same common goal of understanding what's coming.”

[26:01] Tom: “The power of the community is, with a quick search, you can usually find somebody else that's had the same problem and get some kind of idea or inspiration on how to fix that if it's a particular module or project that you're working towards.”

[29:15] Tom: “You can tell sometimes when people are kind of a little bit overwhelmed. You can make that positive change, that difference to them. And I think that's ultimately what the community is about. Yes, it's gamified, yes, there is a leaderboard, but it's actually just about helping others and sharing and sometimes just weighing up different options.”

Start your free trial and be free from CRM work.