The GIFs That Keep on Giving

You may have noticed some snazzy (and sassy) new graphics coming from Cirrus Insight in your inbox and on our social media feeds.

As an organization known for having great salespeople (in addition to great sales productivity software!), we want our content to reflect our personality and connect with prospects, users and partners. Humor denotes mastery and creates an image of Cirrus as competent and approachable.

Erika Collins, Senior Graphic Designer at Cirrus Insight, is the artist behind the magic. She supports Cirrus Insight with a variety of graphics and content needs but the GIFs have got to be our favorites so far! In this article, she’ll be sharing some of the details around her design process.

Here are the stories behind some of our most recent GIF creations:

The Holiday GIF that Started it All

The first GIF in this series that Collins created was the Cirrus Holiday GIF.

We wanted an interesting graphic with a nice holiday theme to send to our customers during the holiday season.

According to Collins, “When creating this first gif I wanted the eyevelope (the Cirrus Insight brand icon) to be the “star” in a sense—it only seemed fitting to include it as the tree topper.”

“I started out by animating the eyevelope to tilt back and forth at the top of the tree. When I was adding the ornaments, a fellow teammate mentioned, it would be neat to see the Cirrus Insight features on the tree.”

“It was getting closer but the tilt from the eyevelope was too subtle a movement and our VP of Marketing, Jill Carpenter, suggested having the features light up on the tree. We ended up liking this animation better, so I added lights that flash at different times. This became the final animation that made it onto our holiday cards and emails.”

The end result? A perfect Cirrus Insight-inspired tribute to the holiday season.

And that’s not where our marketing creativity ended! For a chuckle, check out our email send to accompany this holiday campaign: 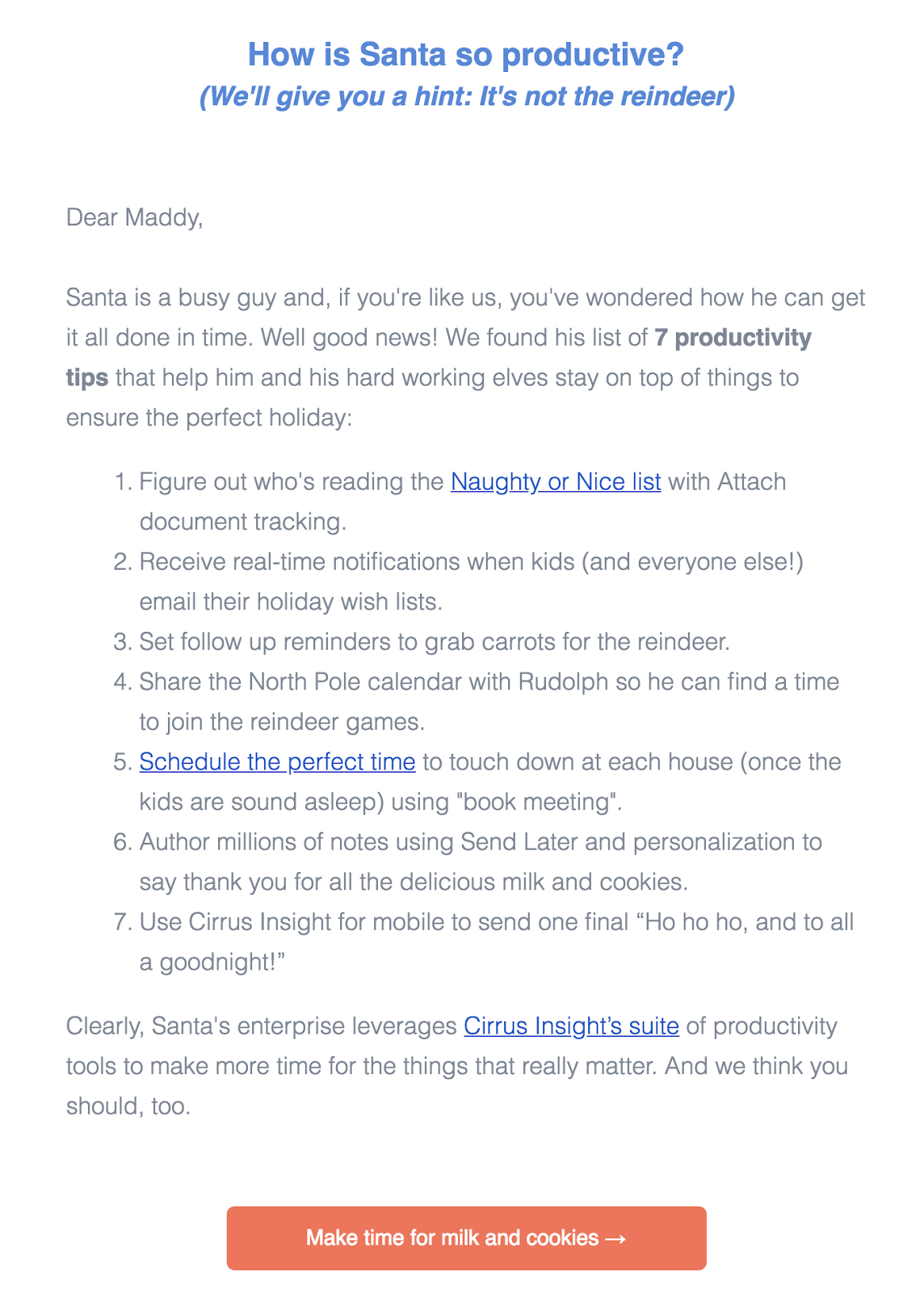 This GIF was the second in the series.

Jill was impressed with the Christmas GIF and asked if it would be possible to create one for Valentine’s Day.

According to Collins, “I was a bit hesitant to create one a mere two days before the holiday as the Christmas GIF had taken me awhile to animate! But I decided to give it my best effort.”

“From the beginning, I animated the open and close of the eyevelope. I figured this would be one of the harder portions of the animation to get the look of the flap opening and closing correct, so I started by deconstructing the eyevelope into it’s moving pieces.”

“Once I got the timing down, all I had to do was add the hearts. I created all the individual elements in Adobe Illustrator and then brought them over into Camtasia 2 for short animations.”

Pro tip: Camtasia is actually a video program but the simplicity of its animations work great for creating GIFs.

Continues Collins, “Once the different colored hearts were created in AI and exported to Camtasia I began trying to achieve a “floating” appearance with the hearts. We wanted to express ‘We love that you’re here’ to our customers with the GIF, so I thought a ‘love note’ with a light airy feel would best express that.”

“Once I created a set number of hearts floating out of the envelope I was able to copy the animation and duplicate it to create more hearts floating out. But then I asked myself ‘How do I finish it off?’ I referred back to our intro animation to our videos and created my own blinking eyevelope, which I thought was a cute little send off.”

See for yourself—this GIF got a lot of love from Cirrus Insight employees and customers, alike:

By this time, we were actively looking for gif ideas to share on social. The idea for this GIF came about when Cirrus Insight Founder Brandon Bruce saw an email from another company that was playing off the Oscars to encourage their customers to “vote along”.

While we didn’t want to create a whole campaign around this one event, we decided that a short email (and some accompanying social) with a playful GIF might play well.

Says Collins, “At this point, I was a little more confident about producing a GIF in a short amount of time—but this GIF took a little more thought. It wasn’t going to be directly tied to a holiday so I asked myself, ‘How am I going to express the same feelings as the other GIFs did?’”

“I realized that we needed to use an iconic trophy in some way. I wanted to have the trophy fly in from the side to look as if the eyevelope was accepting the trophy. Jill also suggested that we have some sort of message come out of the eyevelope.”

“Originally I created a longer statement about how Cirrus Insight users are all winners but decided that it was too long to be visually appealing. In order to make the GIF shorter and condense the text we went with ‘Everyone’s a WINNER’.”

“I feel like the blinking of the eyevelope humanizes it, so I wanted to make this a staple animation at the end of these short GIFs from that point on.”

After the success of our other three GIFs, we created a list of holidays that the GIFs could coincide with.

We’re now featuring these GIFs on our website as a sort of nod to what Google does with their search page Doodles. As such, we have a schedule to release these about every two weeks—switching out the featured GIF on our homepage as Collins creates new masterpieces. 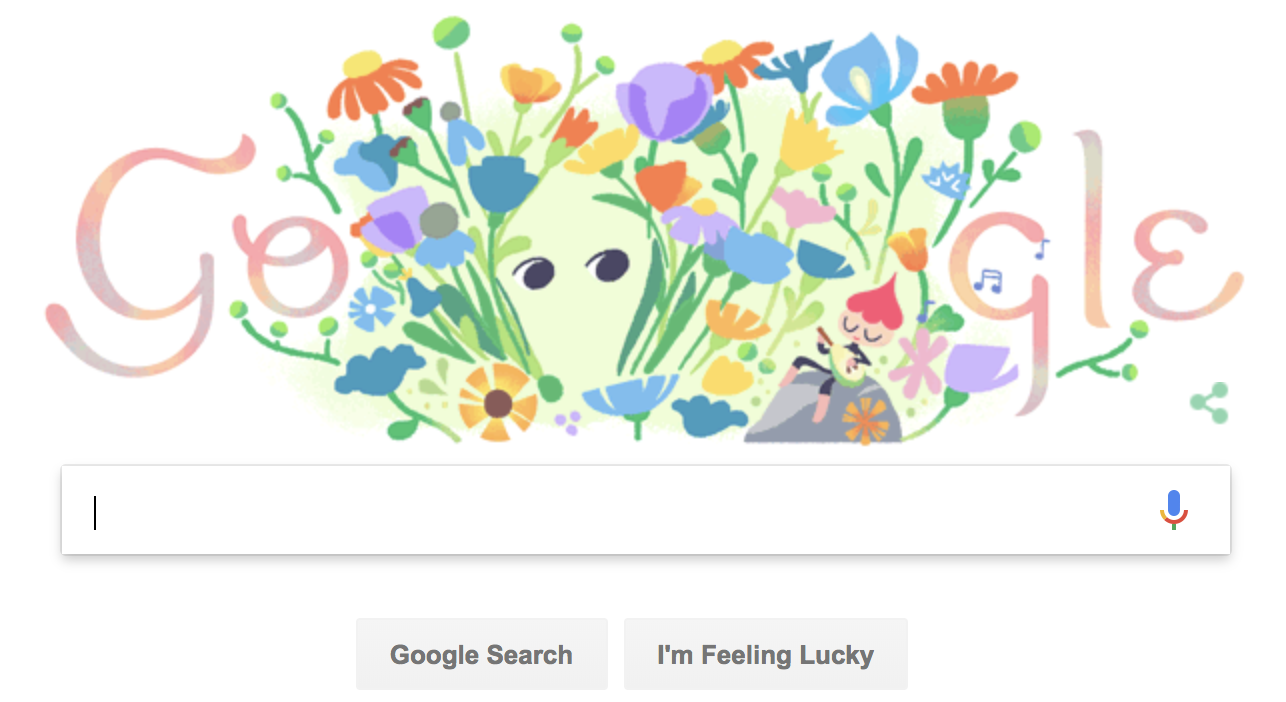 According to Collins, “The Pi Day GIF seemed easy from the beginning. I needed to include a pie.”

“I created four different versions of the pie: a full pie, 1 bite out of the pie, and so on. Then each time as the eyevelope closes, it appears as if more of the pie has been consumed until it was gone.”

We can’t have been the only ones who got hungry after seeing this beaut’:

By the time we wanted an Easter egg GIF, Erika Collins had her process down pat.

Says Collins, “I consulted Jill and she said her thoughts might be that an egg rolls in from the side and bumps the eyevelope in a similar way that the trophy GIF did. But after creating this animation, I felt it lacking. I tried to think about what the egg might do after it bumps the eyevelope—crack? But then what would come out?”

“I broke the egg in two and had a little chick pop out of the bottom of the egg. But could he do more? Yes! I added the chick raising his little feathers and chirping with musical notes that “woke up” the eyevelope.”

[Screenshot of Chick with “arms” up and big notes coming out]

“After consulting with Jill once more, we decided to make the musical notes larger and added a second “chirp” to make it more obvious that the chick was trying to wake the eyevelope with that blink at the end.”

“Feedback from the Cirrus Insight team always adds something to my designs and I feel that this is our strongest, most interesting GIF, yet. I’m excited to create more!”

Final Thoughts: The GIFs that Keep on Giving

What will we GIF next? You’ll have to follow along to keep up! Catch our latest creations on Twitter or sign up for a free trial to receive emails—and GIFs!

Are you a Salesforce user?

Ever wish you could do all this without leaving your inbox? With Cirrus Insight, you can.

The Top 20 Best Sales Tools to Accelerate Your Success

101 Sales Email Templates You Can Use to Close More Deals